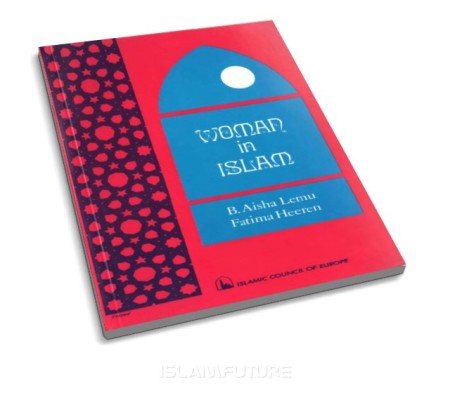 During the last fifteen years since I came to accept Islam, I have been asked many questions about the Muslim way of life by non-Muslim friends and acquaintances. The ignorance of the ordinary educated Westerner about Islam is almost total; but the area where the vacuum of knowledge has been most effectively filled with misinformation is possibly concerning the role of women in Islam. Some non-Muslims ask such questions as “In Islam do you believe that women have souls?” and “Muslim women do not pray or go to Makka, do they?” and “Paradise is only for men in Islam, isn’t it?”

According to these assumptions, the Muslim woman is spiritually a non-person, existing in a world of shadows, oppressed and suppressed, from which she will at death pass into a sort of limbo for soulless non-entities. This impression has in the past often been fostered by Christian missionaries, some of whom may even have actually believed it to be true. Side by side with this image In the Western mind is another one projected by the entertainment media, that of the Muslim woman as a member. of the harem in the Hollywood versions of the Arabian Nights. Here she forms a unit in a flock of scantily-clad and birdwitted young ladies who lie around in palaces awaiting the opportunity to be noticed by their lord and master, the sultan.

These images are of course very appealing to the Western imagination-firstly of the mysterious and chaste veiled woman, living in fear of her jealous and brutal husband; she is the traditional maiden in distress, waiting for St. George to slay the dragon and rescue her; and secondly of the slave-girl, dazzling in silks and jewels, awaiting her master’s pleasure. Which Western man or woman has not at one time or another indulged in a fantasy in which he or she plays one of these roles? This is doubtless why the fantasy lingers so long. We want to believe that these women exist so that we can weave these day-dreams about them, though publicly we must condemn a situation so obviously contrary to the principles of women’s liberation.

This then is the fantasy, and as long as we recognise it as such, it is a pleasant form of escapism. But we are here to discuss women in Islam and to outline what is the role expected of a Muslim woman. Th& best source of information on this must be not tales of imagination and Hollywood’s choicest offerings but the source-book of Islam-that is the Qur’an, and the hadTth, the recorded sayings and actions of the Prophet Muhammad.

My intention is to bring to your notice some of those verses of the Qur’an and sayings of t~e Prophet Mu~ammad which relate to women, and to try to draw some conclusions about what these mean-or should mean-in practice, with regard to a woman’s life. I do not intend to describe the status of Muslim women In individual countries past or present, however, since this varies considerably from one period to another and one place to another due to the influence of regional customs stemming from pre-Islamic or modern cultural factors…

The West has known Islam for over thirteen centuries now, but it has generally known it in antagonistic terms as an enemy and as a threat. It is not surpri’sing therefore that our religion has been portrayed as a hostile, tyrannical, violent and even idolatrous religion and our culture has been painted in dark and dismal colours. This state of affairs cannot be allowed to persist and disfigure relations between Islam and the Western world. With the advance of knowledge and a greater contact between Europe and the Muslim world, intellectual, social, cultural and political and economic, we hope the old attitudes will change, giving place to better understanding and closer co-operation based on loyalty to facts, honest appreciation of areas of agreement and disagreement between us, and respect for differences. where we may disagree.

The International Islamic Conference held in London from 3rd to 12th April, 1976, has no parallel in the history of Europe for never before have so many distinguished Muslim scholars and statesmen been brought together in one place in Europe to explain before the world the teachings of Islam as Muslims understand. them. A major aim of the Conference was the development of a better understanding of Islam and Muslim Culture in the West, with a view to improving relations between Muslims and the followers of other faiths and ideologies.

One of the most memorable sessions was the one devoted to themes relating to woman in Islam. It was addressed by two Muslim women, both coming from the Western background, one English and the other German. As such the Western audience had a chance to listen to the Islamic viewpoint from those who, although coming from a different background, had accepted the Islamic social framework out of conviction and were prepared to share their experience and its intellectual appreciation with others. I am glad that these lectures are being published in the form of a separate book even before they appear in the voluminous proceedings of the Conference. I am thankful to the Islamic Foundation for producing this book so quickly and efficiently.

Ours is a period of tumult and change. Doubt, dissatisfaction with the status quo, yearning for revolution seem to symbolize the spirit of the age. Age-old institutions face the prospect of disintegration. Values that have inspired and led man In the past are being questioned, if not scorned. Everything seems to be in a state of flux.

There is nothing baSically wrong in a mood of inquiry and re-examination. They have been mainsprings of progress in the past and could be so in the future. The situation changes if man loses balance and composure. If periods like these arouse man to evaluate and re-evaluate in the light of a higher criterion, they can open up new horizons and prove harbingers of future progress. But if they generate an overtly negative attitude, they lead to moral and cultural vandalism. Change as such begins to be prized and sought after. It is forgotten that change could be for the better or the worse. Even more important than change is the direction of change and our sense of right and wrong, of truth and falsehood, of justice and injustice and a commitment to prefer right, truth and justice on their antithesis. There Is abundant evidence that we are amidst a period of revolutionary change; there is little evidence that change is In the direction of the right and truth and justice.

In a period like this, it is very Important that focus of attention should be shifted from change per se to change for what. Minds should be riveted towards the ideals, values and prinCiples which should go to make up man’s vision of the future. The centre of concern should be made to move from minutive to the fundamentals, from means to the ends, from techniques to the ideals and ideologies. This is the challenge that besets modern man. This is the issue that attracts most attention of one who tries to look upon the predicament of man in modern society through the eye of a Muslim.

Islam is conscious of the material aspects of human life. It is not a religion of the spirit alone. Its uniqueness lies in treating the entire realm of human life as the real domain of religion. The problems of material life and the technological aspects of society are as much its concern as those of the purification of the soul and the integration of man with his Creator. It is opposed to every such concept of material or spiritual progress that tries to treat the problem in isolation of the other aspect. It adopts an integrative approach. It wants to avail of all the resources at the disposal of man to create a new world where man lives in peace with his Creator and with the entire creation, in short, in peace with himself. And this is what is missing in modern society.

The Family is one of the key institutions of human society. When man is not at peace with himself this state of affairs is reflected most in the realm of human relations, particularly in the family and the relations between the sexes. Any discussion on the crucial problems of our age and on the future of humanity is bound to cluster around relations between the sexes and the institutions of family and education.

The International Islamic Conference held in April, 1976, in London under the auspices of the Islamic Council of Europe and the King Abdul Aziz University focused on the theme of Islam and the Challenge of our Age. A special session (Session V, 8th April, 1976) was devoted to an examination of the Islamic scheme for relations between the sexes. Two European Muslim women spoke on the subject and received a standing ovation from the audience. The entire proceedings of the International Islamic Conference are being edited for publication. But in view of pressing demands from different quarters, these two papers and parts of discussion thereon are being published separately in the present booklet Woman in Islam.

The present writer is responsible for editing the manuscript. Translation of the verses from the Qur’an has been revised in the light of the work done in the Foundation. This booklet is also being produced in the Indonesian and Arabic languages. Dr. M. Natsir is supervising the Indonesian edition while Dr. Muhammad Sakr is looking after the Arabic version.

I am grateful to Brother Salem Azzam, Secretary General, Islamic Council of Europe, for inviting me to edit the proceedings and the Islamic Foundation to publish them on behalf of the Islamic Council of Europe. My thanks are also due to Mr. E. Fox for kindly reading the manuscript. Dr. M. M. Ahsan and Mr. Ashraf Abu Turab have also read the first draft and helped me by their comments.Mrs. K. Hollingworth’s unstinted secretarial assistance is also gratefully acknowledged.